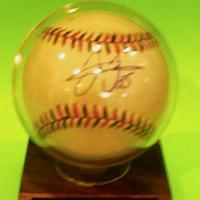 The Big Hurt. Ball comes in acrylic dome on walnut base with Name Plate. We have COA.  This ball has some yellowing which isn't that noticeable under the acrylic, however, we have lowered the price from $95 to $60.

Thomas became one of baseball's biggest stars in the 1990s, playing for the Chicago White Sox. Broadcaster Ken Harrelson coined the nickname "The Big Hurt" for Thomas in the 1992 season.  Frank Thomas is known for his menacing home run power; he routinely swung a rusted piece of rebar (reportedly found during a renovation project in Old Comiskey Park) in the on-deck circle. Thomas played baseball and football at  Auburn University. He is part of an elite group of four players (including Mel Ott, Babe Ruth and Ted Williams) to have at least a .300 batting average, 500 home runs, 1,500 RBI, 1,000 runs and 1,500 walks in a career. He retired February 12th, 2010.

Thomas is one of the biggest players at 6'5" and 275 pounds. In his first full season, in 1991, Thomas finished third in MVP voting with a .318 batting average, 32 home runs, 109 runs batted in as well as walking 138 times. He won the first of four Silver Slugger awards, and led the league in on-base percentage, something he would accomplish four times throughout his career. In 1993 and 1994, Thomas won back-to-back Most Valuable Player awards — the first by a White Sox since Dick Allen in 1972.

In 1994, the baseball season was shortened due to a players' strike and perhaps no one felt the sting of the strike more than Thomas, who stood poised to achieve one of baseball's most prestigious honors: the Triple Crown. Not since 1967 had any player finished the regular season first in average, home runs, and runs batted in. Thomas was contending for the honor when the strike occurred, and his numbers were good enough to earn him a second American League Most Valuable Player award. Pressed by the media to comment on his accomplishments—and his future—Thomas told the Atlanta Journal and Constitution: "I'm not into being known as the best by fans or the media. I care how I'm perceived by my peers. I can settle for the label 'one of the best' because that means you're considered an elite player." From 1991–1997, Thomas finished in the top 10 of the MVP voting every year. In 1997, Thomas won the batting title and finished third in MVP voting. He struggled over the next two seasons, but rebounded in 2000 when he hit .328 with a career-high 43 homers and 143 runs batted in. Thomas finished second in MVP voting that season, behind Jason Giambi of the Oakland Athletics. He also won the 2000 AL Comeback Player of the Year Award.

The Athletics installed Thomas as their everyday DH. He started the season slowly, but ended the season as the team leader in home runs, RBI, slugging percentage, and on-base percentage. He provided a powerful right-handed bat in the middle of the lineup for the division-leading Athletics. He had a stretch where he hit a home run in six straight games. On June 28, 2007, Thomas hit the 500th home run of his career, becoming the 21st player in the history of Major League Baseball to do so. It was a three-run shot off Minnesota's Carlos Silva. Thomas was ejected in the later innings of the game for arguing balls and strikes with the home plate umpire. On September 17, 2007, Thomas hit three home runs in his team's 6-1 win over the Boston Red Sox. It was the second time in his career that Thomas hit three home runs in a game, the first time also against the Red Sox, on September 15, 1996, in a Chicago White Sox loss. Knuckleballer Tim Wakefield started both games for the Red Sox, and gave up five of the six home runs Thomas hit, including all three in the first game.         On February 12, 2010, Thomas announced his retirement from Major League Baseball after not playing in the 2009 season.