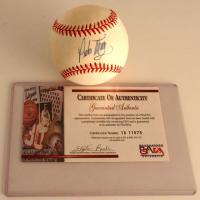 Autographed American Leaque Baseball by Pedro Martinez.  COA from PSADNA: 1A 11675, 1999, Las Vegas. Overall this ball is in excellent condition as it has been in Acrylic case.  The ball has some very slight yellowing on it.

Full Name: Pedro Jaime Martinez Born: 10/25/1971 Birthplace: Manoguayabo, Dominican Republic Height: 5'11"   Weight: 180 Bats: Right Throws: Right College: N/A MLB Debut: 09/24/1992   2004 Highlights:   Ranked second in the American League in strikeouts, strikeouts per nine innings (9.4), third in opponents average (.238), fourth in quality starts (22), seventh in winning percentage (.640), tied for sixth in wins, eighth in home ERA (3.22) and ninth in ERA (3.90)...Finished tied for sixth in the American League in innings pitched and tied for eighth in the AL in starts (matching his career-high)...Has 2,653 career strikeouts, which ranks 19th in major league history and fifth most among active pitchers behind Randy Johnson, Roger Clemens, Greg Maddux and Curt Schilling...His .705 career winning percentage is the best in major league history among pitchers with at least 200 career decisions...Registered six double-digit strikeout games last year...He now has 99 games with 10 or more strikeouts which is fourth in major league history behind only Nolan Ryan (215), Randy Johnson (204) and Roger Clemens (108)...Recorded his 2,500th career strikeout on June 2nd at Anaheim when he fanned Casey Kotchman in the third inning...That game was also his 300th career start...Struck out 10 or more batters in three consecutive starts from August 1st-August 12th...Made his seventh career Opening Day start on April 4th at Baltimore...Went 3-0 with a 1.93 ERA (six earned runs in 28.0 innings) in four interleague starts against National League opponents...NL batters hit .179 off him...Hurled a complete-game shutout in a 6-0 triumph over the Devil Rays on August 12th at Fenway Park...Surrendered six hits, with no walks and 10 strikeouts...Has a 1.17 ERA at Shea Stadium, which is the lowest ERA among active pitchers with a minimum of 40 innings.

POST-SEASON: Went 2-1 to help lead the Red Sox to the World Series Title...Tossing 7.0 innings in Boston's, 8-3, Game Two victory over Anaheim in the ALDS and hurled 7.0 shutout frames in Game Three of the World Series at St. Louis in a game the Red Sox would win, 4-1.


PLEASE SEE OUR LARGE SELECTION OF AUTOGRAPHED BASEBALLS AND PHOTO'S BY CLICKING ON THE LINK DIRECTLY BELOW: