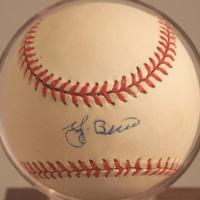 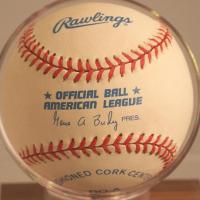 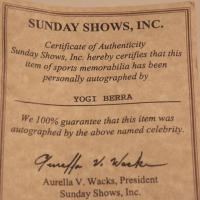 Yogi Berra Autographed Baseball with COA from Sunday Shows, Inc., of Milford, CT.  Sunday Shows if a large show promoter in the Milford Area.  This ball is in excellent condition and comes with a  Rawlings box.

Lawrence Peter "Yogi" Berra (born May 12, 1925) is a former Major League Baseball player and manager. He played almost his entire career for the New York Yankees and was elected to the baseball Hall of Fame in 1972. Berra was one of only four players to be named the Most Valuable Player of the American League three times and one of only six managers to lead both American and National League teams to the World Series.

Berra is widely regarded as one of the greatest catchers in baseball history. According to the win shares formula developed by sabermetrician Bill James, Berra is the greatest catcher of all time and the 52nd greatest non-pitching player in major-league history.  Berra, who quit school after the eighth grade,  has a tendency toward malapropism and fracturing the English language. "It ain't over till it's over" is arguably the most famous example, often quoted.

In 1942, the St. Louis Cardinals spurned Berra in favor of his boyhood best friend, Joe Garagiola. On the surface, the Cardinals seemed to think Garagiola the superior prospect—but team president Branch Rickey actually had an ulterior motive: knowing he was soon to leave St. Louis to take over the operation of the Brooklyn Dodgers and more impressed with Berra than he let on, Rickey apparently planned to hold Berra off until he could sign him for the Dodgers. The plan was ruined when the Yankees got to him first, signing him for the same $500 bonus the Cardinals offered Garagiola. Berra was assigned to the Norfolk Tars of the Class B Piedmont League, where his most memorable feat was driving in 23 runs in a doubleheader.

Following a stint in the U.S. Navy during World War II where he served as a Gunner's Mate in the D-Day invasion, Berra played minor league baseball with the Newark Bears before being called up for seven games in the major leagues in 1946 and was taught under the mentorship of Hall of Famer Bill Dickey, whose number Berra took. The following season he played 83 games for the Yankees, and he would play more than a hundred in each of the following fourteen years.

Berra appeared in fourteen World Series, winning ten championships, both of which are records. Because Berra's playing career coincided with the Yankees' most consistent period, it enabled him to establish the major league records for World Series games (75), at-bats (259), hits (71), doubles (10), singles (49), games caught (63), and catcher putouts (457). In Game 3 of the 1947 World Series, Berra hit the first pinch-hit home run in World Series history, off Brooklyn Dodgers pitcher Ralph Branca (who later served up Bobby Thomson's famous home run in 1951).

Berra was a fifteen-time All-Star, and won the league's MVP award three times, in 1951, 1954 and 1955. From 1950 to 1957, Berra never finished lower than 4th in the voting. He received MVP votes in fifteen consecutive seasons, tied with Barry Bonds and second only to Hank Aaron's nineteen straight seasons with MVP support. (Ted Williams also received MVP votes in every year of his career, but it was twice interrupted by military service.) Between 1949 and 1955, on a team filled with stars such as Mickey Mantle and Joe DiMaggio, it was Berra who led the Yankees in RBI for seven consecutive seasons.

Yogi Berra was excellent at hitting poor pitches, covering all areas of the strike zone (as well as beyond) with great extension. In addition to this wide plate coverage, he also had great bat control. He was able to both swing the bat like a golf club to hit low pitches for deep home runs, and chop at high pitches for line drives. Five times, Berra had more home runs in a season than strikeouts. In 1950, Berra struck out twelve times in 597 at-bats. This combination made him a feared "clutch hitter"; rival manager Paul Richards once called Berra "the toughest man in the league in the last three innings." When asked about swinging at "bad pitches", Berra reportedly said, "If I can hit it, it's a good pitch."

As a fielder, Berra was truly outstanding. Quick, mobile, and a great handler of pitchers, Berra led all American League catchers eight times in games caught and in chances accepted, six times in double plays (a major league record), eight times in putouts, three times in assists, and once in fielding percentage. Berra left the game with the AL records for catcher putouts (8,723) and chances accepted (9,520). He was also one of only four catchers to ever field 1.000 for a season, playing 88 errorless games in 1958. He was the first catcher to leave a finger outside his glove, a style most other catchers eventually emulated.  Later in his career, he became a good defensive outfielder in Yankee Stadium's notoriously difficult left field. In June 1962, at the age of 37, Berra showed his superb physical endurance by catching an entire 22-inning, seven-hour game against the Tigers.  One of the most notable days of Berra's playing career came when he caught Don Larsen's perfect game in the 1956 World Series, the only no-hitter ever thrown in postseason play. The pictures of Berra leaping into Larsen's arms following the 27th out are among the sport's most memorable images.

Please see our large selection of Autographed Baseballs and Photo's by clicking on the link directly below: