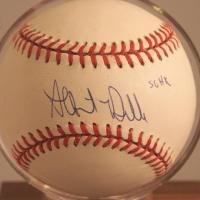 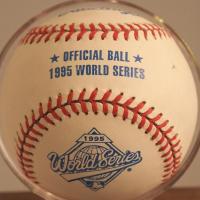 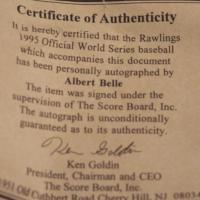 Rare Albert Belle Autographed 1995 World Series Baseball with COA from The Score Board and signed with a 50HR.  The  Atlanta Braves won this series in six games.

Albert Jojuan Belle (born August 25, 1966) is a former American Major League Baseball outfielder for the Cleveland Indians, Chicago White Sox, and Baltimore Orioles. Standing at 6'2 and weighing in at 225 lbs, Albert was one of the leading sluggers of his time, and in 1995 he became the first player to hit 50 doubles and 50 home runs in a single season.

Belle was also considered a model of consistency, compiling a .295 career batting average, averaging 37 home runs and 120 RBIs a season over the ten main years of his major league career from 1991 to 2000. Belle is also one of only six players in major league history to have nine consecutive 100-RBI seasons. However, his combative personality combined with occasional angry outbursts created a reputation for surliness that often overshadowed his on-field hitting performance.

Belle became the fourth player to have eight straight seasons of 30 home runs and 100 RBI, joining Babe Ruth, Jimmie Foxx, and Lou Gehrig (a feat matched by Albert Pujols in 2008). Alex Rodriguez has 12 straight. As a fielder, Belle had a powerful throwing arm, unsurprising given that he was a gifted pitcher in high school. His Range Factor by games played was consistently higher than the Major League Average Range Factor at that position.  He was an accomplished base runner and base stealer, with a career high of 23 steals in 1993, and a surprising 17 steals in 1999 despite hip problems. Belle led the league three times in RBIs, three times in total bases, three times in extra-base hits, and twice in slugging. He was a five-time All-Star between 1993 and 1997.

In 1995, Belle became the first player in the history of the major leagues to hit 50 homers and 50 doubles in the same season; before Belle, the last player to reach as many as 40 in both categories had been Willie Stargell in 1973. The achievement was especially impressive because Belle only played 143 games in 1995 due to a season shortened by the previous year's players strike. The 40-40 mark has been surpassed since, most recently by Alfonso Soriano in 2006, but Belle's 50-50 combo remains unique.

Albert Belle homered in the final at-bat of his major-league career on October 1, 2000.

Please see our large selection of autographed Baseballs & Photo's by clicking ont the link directly below: