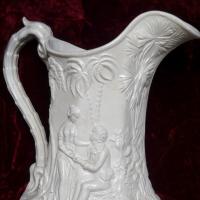 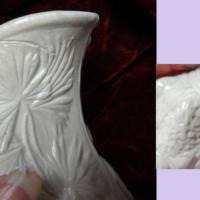 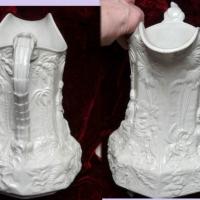 Parian is a type of "Bisque" pottery. It was named after Paros, a Greek island renowned for its fine-textured, white marble of the same name. Invented by Thomas Battam, Parian provided a lower cost alternative to carved Marble. A notable advantage was that it could be prepared in a liquid form and cast in a mold - a quality lending itself to mass production.

Parian ware was utilized mainly for busts and figurines, and occasionally for dishes and small vases such as might be carved from marble. Several English factories claimed credit for its development. The Staffordshire firm run by William Taylor Copeland and Thomas Garrett first produced and marketed it in 1842.

There are essentially 2 types of Parian pottery. The first is used in the making of statues or figures and is call "statuary". The second type is called Parian Ware and is used in the creation of small dishes and vases and the like.

This wonderful pitcher stands approximately 10" in height and is nearly 8" in width. The pitcher depicts two lovers holding hands in either a lush forest or perhaps on an island on one side; on the other side the man and the woman are seated next to one another while cradling either a bowl or a cup.

There are no cracks or chips in evidence.

There are lines in evidence (in the inner rear surface of the pitcher) that would seem to indicate that they were a end result of the manufacturing process of this piece. We also can definitely see a "mold seam" down the front of the pitcher; which again appears to be a result of it's manufacture. It does appear from our research that this manufacturing process may leave slight blemishes such as those described above. They do not however diminish the beauty / impact of the piece in any way.

A wonderful handcrafted piece that must be seen up close to be fully appreciated.

For additional information or to place an order for this item, please feel free to email us at atg1@optonline.net or call 203-333-5836.